Land of the Powerful Owl

← Shake It Down
Jolene →

Land of the Powerful Owl was recorded live in Darren Middleton’s (Powderfinger) back yard shed in Samford Valley near Brisbane over 3 days in 2009. The quintet sat in a circle surrounded by microphones and bluegrass paraphernalia. But these boys are no bluegrass purists.

This is very much a collection of city dwelling Australian songwriters with a common love of acoustic music and having a good time. The Wilson Pickers just happen to use bluegrass instrumentation to get the songs across. The main ingredient is the five part vocal harmonies. The process of recording live shows a true reflection of what happens when you cross experienced musicianship with a serious love of the craft of writing songs.

From the studio to hitting the road supporting the release of this album became a whirlwind for the Wilson Pickers and before they could say ‘banjo’ they were nominated for Best Blues and Roots Album at the 2009 ARIA Awards. 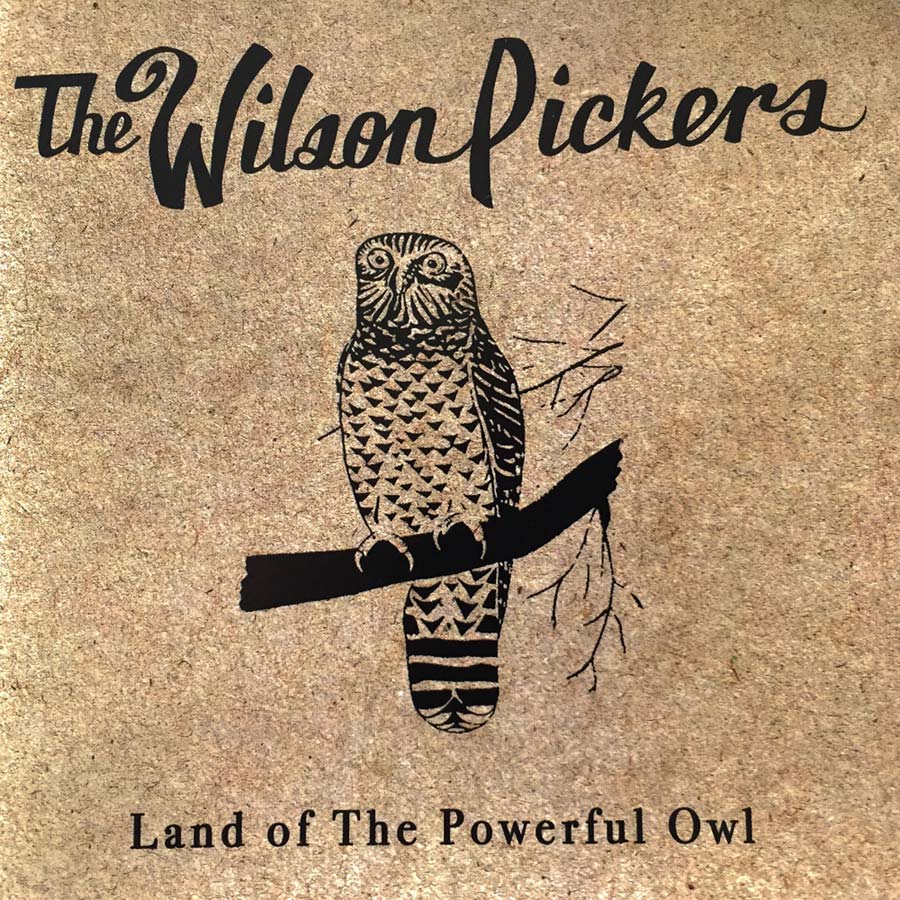 I’ve been waiting for this…. What started out as a random idea of gathering together a few musical friends from different ends of the east coast has become a reality with the debut album from The Wilson Pickers, Land of the Powerful Owl.

These guys are an eclectic mix of musicians from Victoria and Queensland, all respected in their own right, who have decided to unite periodically, get in touch with their country side and make beautiful music together. Andrew Morris, Danny Widdicombe, Ben Salter, Sime Nugent and John Bedggood make up this five piece ensemble of amazing musical talent.

Recorded in a monumental effort of three days up in Brisbane, they overcame a few slight obstacles (Day 1; Mr Salter,suffering from slight navigational difficulties gets lost in Melbourne, Day 2; sickness taking out Danny) to finally all getting together in the same studio on Day 3 to put the final touches on their debut album. And they sound like they are had fun.

From the opening track with Moz singing Can’t Steal My Love, the album weaves through eleven original numbers, juggling lead singers and varied instruments. There is a fantastic mix of sounds and songs, made possible by the assembly of the five talented singers and songwriters that make up this collective.

The whole album is full of catchy, toe tappers from Gold River to the slightly slower Country Fair, all delivered with the enthusiasm and honesty of a bunch of guys who not only love music, but obviously respect each other and enjoy each others company.

And just take a look at the list of instruments used on this album- as well as the usual guitars, these guys use an interesting array of musical tools in the form of the harp, banjo, fiddle, harmonica and mandolin which all help to give this album its distinct blue-grass feel. Listen to the charming I’m just like a little old man and I dare you to try and not have that foot tapping along. It’s become a definate favourite of mine..

The end of October/start of November sees the boys travelling the east coast launching their album. With stops in Melbourne, Sydney and Brissy, followed by dates at a few places all over the place, they are even planning on a nice little get together in Tamworth next year. May the Wilson Pickers overcome their locational differences and gather together again and again. I’m hoping this is just the beginning…

Do your self a favour and take a listen to this. Even if country/blue-grass is not your style, check it out, expand the music genres that your ears consume, you never know- you may find that you like it…

Supergroups, contrary to mainstream opinion, aren’t just groups that are really famous, or even really good. Nay, supergroups are when musicians who are known for being in other groups (or performing on their own) come together, motivated by a love of performing, feelings of charity, or the dump trucks of money driven up to their houses.

Luckily, Brisbane-and-Melbourne’s newest supergroup The Wilson Pickers fits firmly into the first category, with each of the members bringing a solid reputation into this outing. Ben Salter from The Gin Club, Andrew Morris, ex-Palladium frontman turned solo artist, and Danny Widdicombe represent sunny Queensland, while Sime Nugent and John Bedggood fly the Victorian flag. With five superb musicians in the band, there was always going to be high expectations for their debut album Land Of The Powerful Owl, but it meets them all, and passes with flying colours.

Of course, these five musos have similar styles (it’s not like they’re being paired with Britney Spears here), and alt-country and blues numbers are the order of the day here. Each band member does lead vocals on some tracks, but it’s the group numbers that really shine, like the sparse I Won’t Tell and the Neil-Young inspired Gold River. Brilliant acoustic guitar sits alongside banjo, harmonica and violin, giving tracks like How Long? and Little Old Man an authentic country twang. There’s some opportunities for some country-foot-stomping during Graves Or Gold, and the slower bluesy numbers work well, especially closer Barman Blues.

Each of the five vocalists put in their standard excellent performances, suiting the music perfectly – there’s a reason these guys cite influences of the likes of Steve Earle, Willy Nelson and Gillian Welch. There’s an authenticity to these songs, but also a laidback versatility. This album was originally recorded as demo, in a single four-hour session. Even listening to the newly remastered version that has been released, you get the feeling that it wasn’t even a rush, and they could have gotten two albums from that session if they really wanted to.

The Wilson Pickers will be touring more regularly now, including an album tour later in October, and their live show is even better than their recordings. It’s hard to imagine, because Land Of The Powerful Owl is a superb debut, full of the rich soul that each of these musicians bring to every performance.

THE songwriter collective is becoming quite the thing in 2008 with the rise of Queensland band The Gin Club. That group shares a member with The Wilson Pickers in Ben Salter, who joins fellow singer-songwriters in Danny Widdicombe, Andrew Morris and Sime Nugent and multi-instrumentalist John Bedggood, who Morris met when they shared the stage in Bernard Fanning’s solo band.

It’s bluegrass-band instrumentation: acoustic guitars, banjo, fiddle, mandolin and harp, and the mood is mostly sunny and upbeat. It’s the kind of music where you can imagine the players sitting around a table on the back porch swapping lines, and when it’s time for the solo, well, you better move in a little closer to the microphone.

The recording sessions were almost that casual when a few days could eventually be found where they were all in the one place at the one time, recorded in Samford, possibly with the horses coming up from the bottom paddock for a look.

Widdicombe’s Cold River has the flavour of some long-lost Neil Young gem; Nugent’s Graves or Gold bubbles along with sublime harmonies; Barman Blues is the kind of loose party blues, complete with false start, that sounds like The Wilson Pickers are sitting right there in the room with you and passing the bottle around.

Fans of, say, Neil Young’s Old Ways, this is for you.

A wonderful debut by a group of talented musicians all openly influenced by Bob Dylan, Crosby, Stills, Nash and Young, and Paul Kelly, with a generous helping of bluegrassy banjo, mandolin and resonator guitar to drive things along.

Featuring musicians from Melbourne (including the very prolific Sime Nugent) and Brisbane (including Danny Widdicombe), The Wilson Pickers’ debut is a wonderful collection of catchy, original tunes. “Graves Or Gold” is a great acoustic sing-along and “Cold River” features beautifully rich harmonies – these boys sure work nicely together.

While the recording quality varies between tracks, this rarely detracts from the high calibre of songwriting and instrumentation. “Little Old Man” features a driving fiddle and the wonderful refrain “I’m just like a little old man, grumpy as can be”! “How Long”begins with an old-timey gospel tinge before some fine picking and a melody reminiscent of “Will the Circle be Unbroken” kicks in. Widdicombe’s resonator guitar is a highlight on “Apple Grove”.

Finishing with the delightfully laconic “Barman Blues” (complete with background bar-room noises!), Land of the Powerful Owl is a great album. My only gripe is that at 38 minutes, it’s far too short – gimme more!